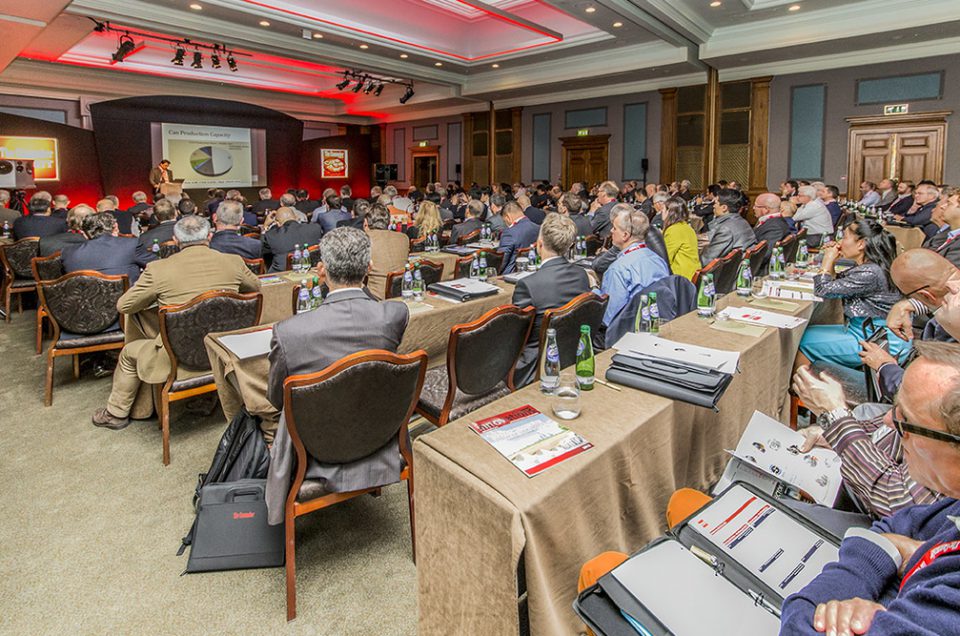 Described as “the summit of all conventions”, The Canmaker Summit took place at the end of October. Mónica Higuera reports from Gleneagles in Scotland

The Canmaker Summit this year provided once again an unparalleled opportunity to network with senior representatives of the world’s canmaking industry.

It also presented the chance to hear directly from canmaking companies and their suppliers how they are preparing to grow further in both established and new markets.

A case in point is Saudi Arabia’s Mahmood Saeed Cans & Ends Co (MSCANCO), which began manufacturing beverage cans and ends three years ago in Jeddah, and is now starting up two aluminium beverage can lines in Egypt.

Located on the Cairo-Alexandria highway, commissioning of the plant has been delayed by two years due to the country’s unexpected political developments, the company’s director-general Dr Ayman Khalil told delegates.

Dr Khalil added that half the output of the new plant 80km north of Cairo will be supplying Europe, while the other half will serve Egypt’s market.

He explained that it is cheaper to ship from Egypt than to set up a plant in Europe and despite the logistics involved, the operation will still be competitive. Lead times from Alexandria to northern Europe are between three and four days at a cost of $600 per container, he noted, while for other areas lead times are two days at $400 per container.

He added that to ship a container with some 7 million ends from Jeddah to Japan costs $600.

Following investments, MSCANCO’s total canmaking capacity is planned to increase to 4.7 billion cans a year in 2016 compared to 850 million in 2012; while for ends, capacity is expected to double to 17bn ends by 2017.

Dr Khalil also provided data on the Middle East can market, with capacity for the region currently estimated at 28.8bn, of which 49 percent is controlled by Saudi Arabia, 17 percent by Egypt, 12 percent by the United Arab Emirates, 7 percent by Iraq, 6 percent by Kuwait and 2 percent by Tunisia.

Meanwhile for beverage can ends, annual manufacturing capacity in the Middle East is now 35bn units, of which Saudi Arabia controls 85 percent, the UAE 11 percent, and Kuwait 4 percent, he said.

The company’s managing director for the beverage can business, Erik Smuts, shared with delegates how the company has succeeded in turning around misperceptions about beer cans in South Africa, and detailed a series of marketing actions that helped it double its volumes over the last five years.

Nampak set out to create a positive brand, a Can do! icon that the so-called millennial generation aged 18-34 could identify with.

Smuts explained that there had been a decline in beverage can volumes in the country for more than a decade due to image problems and the idea that there was a metallic taste in canned beer.

The biggest shift in Nampak’s marketing tactics came as a result of research findings in 2010, based on customer questionnaires and interviews, consumers research, and focused group sessions.

“A significant portion of the market was discovered to have no strong affiliation to either pack type, cans or glass bottles. We saw this as an opportunity to convert this population to loyal can users and secure their preference for cans.

“All marketing efforts were focused on this large, susceptible group who incidentally also had a desire for the 440ml value pack. Our marketing focus changed to the township-based youth market, 18-35 in age.”

It began with a television and radio campaign that was launched during the FIFA World Cup in South Africa in 2010 featuring Shosholoza, South Africa’s best known and loved song and beverage cans decorated with the country’s flag, explained Smuts.

Another campaign, ‘Every can counts’, raised three cents per each beverage can sold for education. “This is the campaign that started to move our volumes,” he added. Smuts showed several videos created to communicate that it is cool to be seen with a can in your hand, and leveraged on the recyclability of the can, inviting consumers to take pictures of themselves with cans in their cans and to post them in social media.

Nampak also began awarding prizes for content generated by consumers and uploaded in websites such as Facebook and Youtube, which then evolved into a weekly talent show on national television.

Additionally, it organised a series of outdoor events and concerts where entry is free and only consumption of beverage cans is allowed, and where brand owners are invited to sell their canned drinks.


© 1988 - 2020 All Rights Reserved. The Canmaker Summit is part of The Sayers Publishing Group Ltd. Registered in the UK